Created a self-contained network composed of two Raspberry Pi computers which send each other a set of photos repeatedly in perpetuity. Created for Eva and Franco Mattes's Personal Photographs, September 2009, displayed at Team Gallery in Los Angeles in 2019.

A sequel to BEGIN PGP MIXTAPE, which was a soundtrack to the surveillence state from 9/11 to the Snowden revelations. This one was designed as a soundtrack for the age of suveillence capitalism post-Snowden. Created for Maker Made 2019 in Boulder, Colorado.

An early warning system for doxing designed as a "Google Alert for worst case scenarios." Scraped 8chan's /pol forum into a private archive and provided email or text alerts based on any given search terms within a half hour of being posted. 8chan shuttered and sophon was given an early retirement. It now exists as an invite-only archive.

A galaxy-like web-based interactive 3D visualization of 20,000+ articles from a major UK newspaper for a quarter century, automatically sorted into 3D clusters with machine learning. Included interactions for navigation and filtering by category color (our teams's algorithm choice didn't name the categories).

An simple one-page proof-of-concept web application which visualzied the output of doc2vec machine learning applied to financial documents. It placed each discovered category into a color-coded section with links to the original in an internal document archive.

An experimental static visualiztion of CLO risk, which utilized simiulation data from a Monte Carlo scenario across time to show how overally "risky" its investment could be, using only HTML, CSS and vanilla JS. Designed for an undisclosed AI lab and never launched.

An art piece sent to the NSA with an encrypted audio track. Arduino + Wave shield sandwiched in laser-etched acrylic. AES-128/Whirlpool used for encrypting the SD Card.

An Arduino Yun-based 3D printed sculpture which pulses red when US-EAST-1 is having issues.

An life-logging camera based on the Raspberry Pi and various other open hardware components. Used to generate lifegifs.

A collaborative data visualization with Jon Dahan and Blacki Migliozzi which visualized and sonified ad trackers blocked by Ghostery. Created for the Hack the Trackers hackathon.

An interactive art piece which sends a TCP packet burst to MPAA.org when you shoot it with Nerf guns, using an Arduino, Wifi shield and pressure sensor. Created for Art Hack Day San Francisco.

A printable HTML5 newspaper featuring content aggregated from the Tumblr API. Created as my project for The New York Times's 2012 TimesOpen Hack Day.

Twilio-powered text message voting application built on Ruby on Rails designed for use with SMS shortcodes.

A web/large-screen-in-midtown companion piece to Paul Christophe's Bot Zoo during Art Hack Day. HTML5 and Ruby is abused to intentionally create the best worst looking site for a large screen whilst assaulting the audience with British SMS spam messages in a giant pink Papyrus font.

My project for Photo Hack Day 2011. Fight over what kind of photos to display full-screen on a screen of any size (like, say, the Nasdaq display on Times Square) by texting tags. Ingredients include HTML5, CSS3, Twilio, and Flickr's API.

A Greasemonkey userscript for distraction affliction correction. Adds a 30 second delay to the display of any web page you open in your browser, as per the beckoning of Randal Munroe of xkcd fame.

A small JavaScript library to display a glyph for iOS device users indicating they can use two fingers to scroll in an area that would otherwise have a scrollbar on other devices.

Programmed Ruby script and Arduino microcontroller to create a phone-booth-ish interface to an easy, push-button system to prank call people with a variety of troll-tastic sound clips, including this one. Premiered at Maker Faire 2011, trolling 460+ people in its wake.

A Greasemonkey userscript to replace all instances of "Lady Gage" with "Gordon Freeman" for a celebrity-free cybersauce.

Created a proof-of-concept web application and Greasemonkey script which obfuscates a user's search history in a variety of search engines, including Google, where the things you "clicked" on a search results page are also obfuscated.

Refitted a Pentium III PC to run Debian, MAME, pygame and cwiid to create an Wiimote-controlled arcade machine that took quarters in exchange for gameplay. Created with assistance from Ryan MacArthur, the Shmoo Group, and Kenshoto. 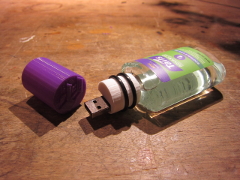 Custom-created USB drives pre-loaded with Tails, the Tor-powered live Linux distriution designed to run on a CD or USB drive. Each is made to match the "branding" of the Tails and Tor projects on top of the general form of drug store hand sanitizer. Nonstandard components can be 3D-printed using the model and instructions on Thingiverse. 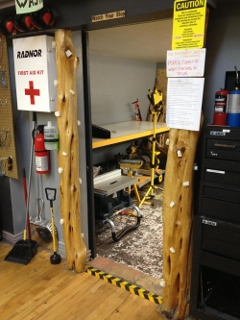 Collaborative installation with Moheeb Zara where the mesquite trunks in HeatSync Labs's machinery shop are transformed into a land of giant snack food, including a Foursquare venue to help bolster tourism in downtown Mesa, Arizona. 3D-printable salt crystals available on Thingiverse. 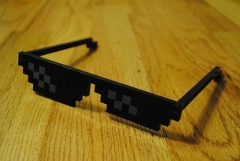 Laser-cut acrylic opaque glasses created as a pixel-by-pixel manifestation of the late 2007 "Deal With It" dog meme. Created as a costume piece for HallowMeme 2012. 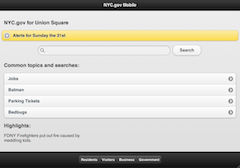 My part in a series of design concepts and prototypes created by my team, Appleseed, at the Reinvent NYC.gov hackathon. My mobile design put a focus on location-aware notifications, popular searches to expedite the search process for a measured majority of users, as well as the inclusion of Facebook-share-like visually-aided search results. Our team's re-take on search won us the best UI award, which included a beauty queen trophy. 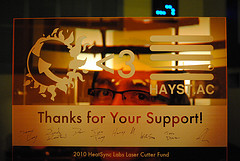 A laser-cut acrylic plaque designed as a special reward for a successful Kickstarter campaign for a HeatSync Labs laser cutter. 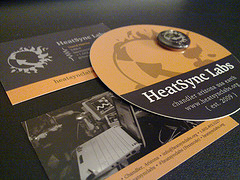 Logo for a Phoenix-area data center. 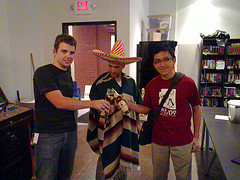 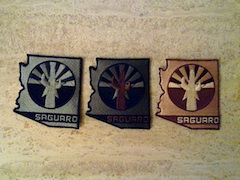